Hardly anyone is against innovation. Creativity is an unalloyed good. In the age of the creative class and Silicon Valley, the future belongs to those with “brains”—while the poor souls in low-paid services or, God forbid, manufacturing risk the fate of permanent irrelevance, like travel agents or guys who used to play saxophone solos in rock songs. But how were Americans persuaded that the future of their economy rested on buzzwords like creativity, innovation, and information?

Brain Magnet: Research Triangle Park and the Idea of the Idea Economy is about the way Americans came to think and speak differently about the economy in the late twentieth century. It uses North Carolina’s Research Triangle Park (RTP)—an ambitious development project launched in 1959 that rapidly became the largest research park in the United States—to consider how the very concept of an economy dedicated to the production of ideas and information emerged since the 1950s. Local boosters talked incessantly of creativity and creative workers, of cultivating a “stimulating” intellectual climate around the universities of Raleigh, Durham, and Chapel Hill, in a bid to convince high-tech corporations and the scientists and engineers they hoped to employ to relocate to the so-called “Research Triangle.” As Durham banker John Stewart put it in 1967, “Progress goes where there are brains and water”—and North Carolinians aggressively sought to attract as many “brains” as possible by courting companies such as IBM (1965) and Burroughs-Wellcome (1969), as well as nonprofit institutions like the National Humanities Center (1978).

In doing so, they used language that strikingly resembles the concepts of the “creative class” and “creative place-making” introduced by scholars such as Richard Florida, Ann Markusen and others in the late twentieth and early twenty-first centuries. In fact, we find in the piney woods of North Carolina an early vision of the “post-industrial society,” well before figures such as sociologist Daniel Bell popularized the term in the early 1970s.

For North Carolinians, of course, theory hardly mattered. Without using exactly the same terminology, they set out to build, beginning in the 1950s, an economy that privileged the skills and knowledge of highly educated workers, the scientists and engineers who created software, pharmaceutical patents, and other new technologies. Brain Magnet tells the story of this new form of “cognitive capitalism”—the apt term used by theorists such as Carlo Vercellone and Yann Moulier-Boutang—and how it evolved on the ground. Historians have done profound work about the decline of liberalism and the rise of the New Right in the suburban Sunbelt, while scholars have begun to look at the interplay between universities and high-tech firms from a policy perspective. However, I propose to take a more capacious look at the intellectual framework in which the information economy emerged. Its rise was neither predestined nor natural, and historians have paid too little attention to how Americans pieced together a vision of an economy fueled by knowledge and dedicated to the production of intellectual property.

This project is under contract with Columbia University Press as part of the new Studies in the History of U.S. Capitalism series. Part of the study can be found in an article in the Journal of Urban History and an essay in the edited collection The Bohemian South, from University of North Carolina Press.

Democracy of Sound explores the many ways Americans have produced (and reproduced) music from the wax cylinder era of the 1890s to the age of the mp3. It reveals how policymakers justified sweeping property rights that favored entertainment and high-tech interests over consumers and the public domain by the end of the twentieth century. In the Progressive Era, lawmakers were reluctant to expand the “monopoly” power of copyright and declined to extend protection to sound recordings; in their view, free competition and public access to culture trumped the importance of rights held by artists, publishers, and record labels. Democracy of Sound follows the record collectors, New Left radicals, and mere opportunists who took advantage of this gap in the law to copy and circulate sound recordings, ultimately provoking the courts and Congress to devise new rationales for protecting music from unauthorized reproduction in the 1960s. The result was a robust expansion of property rights; as the US shed factory jobs and Hollywood and Silicon Valley lobbied for influence, policymakers came to believe that protecting information was the surest path to economic growth. Piracy continued in the face of new legal restrictions, though, and a movement to curb intellectual property began to take shape by the 1990s.

“This book is for music lovers and those of a certain age who remember artists from the Jazz and Rock days of the 1960s when tape recorders and vinyl were in place and bootlegged recordings of Bob Dylan and Janis Joplin were the in-thing to have. You can see how [Cummings] has enjoyed researching the detailed background of music piracy which makes this book a jolly good read providing the history of music piracy from the late 19th century onwards.” —Entertainment Law Review

“Offers a detailed narrative account of how [copyright] issues became so complicated – and how, in the face of corporate pressure, they’re becoming brutally simpleEL Cummings has provided a usable, musical past.” –Jim Cullen, History News Network

“Valuable… Cummings’ book makes clear that piracy will continue, and that that is far from being a bad thing.” —Reason

“From Supreme Court battles over player piano rolls to the music industry’s $75 trillion lawsuit against Limewire, Democracy of Sound shows how we arrived at today’s debates about music ownership and piracy. Cummings is not only a skilled historian, but also a lively story-teller who can explain complex copyright issues with admirable clarity. For anyone with an opinion about the politics, economics, and ethics of music copying, this book offers essential perspective.” –David Suisman, author of Selling Sounds: The Commercial Revolution in American Music

“Piracy may be the dominant issue troubling musicians and the culture industries today, but as Alex Cummings shows, struggles over appropriation, sharing, and theft have long shaped the entire history of recorded sound and the music business. Combining legal, cultural, and business history, Democracy of Sound elegantly and impartially illuminates how Americans made music into a thing, while fighting bitterly over who would gain access to that music. Anyone with any interest in the future of copyright or in our cultural past should read this important book.” –Charles F. McGovern, author of Sold American: Consumption and Citizenship, 1890-1945

“Beautifully crafted, intelligently researched, and cogently argued, Democracy of Sound offers readers a compelling analysis of the changing legal status of recorded music in the United States from the 1870s to the present. Many books have been written about intellectual property; few have done more to make its significance accessible to the general reader. It will appeal not only to specialists in American studies, music, and law, but also to anyone who cares about American popular culture, past and present.” –Richard John, author of Network Nation 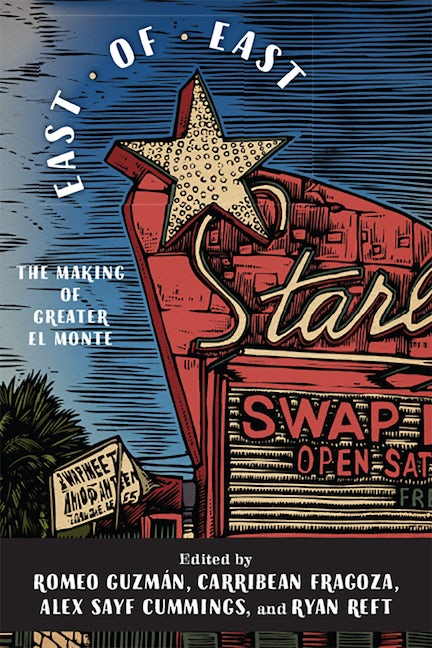 East of East: The Making of Greater El Monte, is an edited collection of thirty-one essays that trace the experience of a California community over three centuries, from eighteenth-century Spanish colonization to twenty-first century globalization. Employing traditional historical scholarship, oral history, creative nonfiction and original art, the book provides a radical new history of El Monte and South El Monte, showing how interdisciplinary and community-engaged scholarship can break new ground in public history. East of East tells stories that have been excluded from dominant historical narratives—stories that long survived only in the popular memory of residents, as well as narratives that have been almost completely buried and all but forgotten. Its cast of characters includes white vigilantes, Mexican anarchists, Japanese farmers, labor organizers, civil rights pioneers, and punk rockers, as well as the ordinary and unnamed youth who generated a vibrant local culture at dances and dive bars.

“Richly layered and movingly felt, East of East is a collaborative history of a seemingly ordinary place revealed as a crossroads of the local and the global. A remarkable interleaving of scholarship and the intimacy of memory.” –D.J. Waldie, author of Holy Land: A Suburban Memoir

“East of East makes several important interventions. First, it is part of an exciting movement to reclaim the histories and geographies of cities from the bottom up. Second, it focuses on a vital but completely overlooked part of LA history – El Monte. Essential reading for all those interested in southern California.” — Laura Pulido, co-author of A People’s Guide to Los Angeles